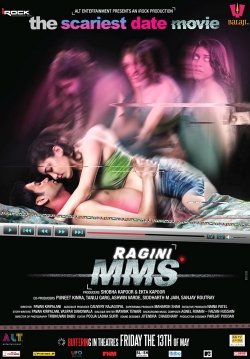 The movie review of Ragini MMS on ApunKaChoice.com. Full credit to the film’s actors Raj Kumar Yadav and Kainaz Motivala for their incredibly natural performances. If you are a sucker for horror films, Ragini MMS is tailor-made for you.

Sex, Chudail and Videotapes, anyone! Ekta Kapoor’s Ragini MMS holds out a heady concoction, a new cocktail of horror, humour and hawas — all shaken and stirred to tickle, titillate and then scare the living daylights out of you. On top of it, the voyeuristic, hand-held camera work (Tribhuvan Babu), combined with excellent sound work (Faizan-Agnel), makes the film so hauntingly real that the faint of heart could be advised an immediate ECG after a viewing of the film.

Paranormal Activity and The Blair Witch Project are clear inspirations, but Ragini MMS is still disturbingly different, particularly when compared to the Ramsay-inspired spook-fests…err…spook-jests that the lovers of horror genre in India have been surfeited with. There are no grotesque ghosts with horrible make-up, no spaced out tantrics blabbering about a tormented atma seeking mukti, no esoteric revelations meriting a grin. What we have rather is the shadow of a chudail who claims she’s not one, and freaks out the sexed up lovers out to have a dirty weekend in the bungalow that she (chudail) claims is her home.

Young lovers Ragini (Kainaz Motivala) and Uday (Raj Kumar Yadav) arrive in a desolate bungalow for a sex-filled weekend. Uday, it turns out has an ulterior motive. The bungalow is rigged with secret cameras and his plan is to make a porn movie with Ragini and then sell it out in exchange for a couple of movie roles he’s been promised by his boss. But things go horribly wrong for the couple as they are haunted by an unseen presence in the house, a woman whose shadow appears now and then in the mirror or in the background and whose gruffly intonation — Main chudail nahin hoon. Maine apne bachcho ko nahin maara — sends a chill down your spine.

As the backstory is somewhat casually laid out by Uday’s friend — the bungalow houses the spirit of an old woman who was accused of being a witch and of killing her children and was therefore unjustifiably slain. She now lays claim to the bungalow and torments anyone who ventures therein.

Kudos to director Pavan Kirpalani for making a film that looks and sounds utterly real. The dialogues are sprinkled with everyday casual banter that any young couple indulges in. There are some genuine chuckle-worthy scenes — like when Uday’s friend Vishal gets creamed in the foreplay itself and his girlfriend puns on his name. Even the scenes when Uday is dumbstruck with terror evoke a grin or two. But slowly and creepily, the mood changes and the kinky sex toys cease to be funny and what you have is a hapless girl handcuffed to a four-poster bed, with a dead body on the side and an evil ghost on the loose. A truly chilling scenario.

Full credit to the film’s actors Raj Kumar Yadav and Kainaz Motivala for their incredibly natural performances. Their intimacy is so real and without a shade of inhibition. But their best comes through in the second half when the film gets seriously scary.

If you are a sucker for horror films, Ragini MMS is tailor-made for you. Don’t miss it.

Ragini MMS Rating: 4 stars out of 5