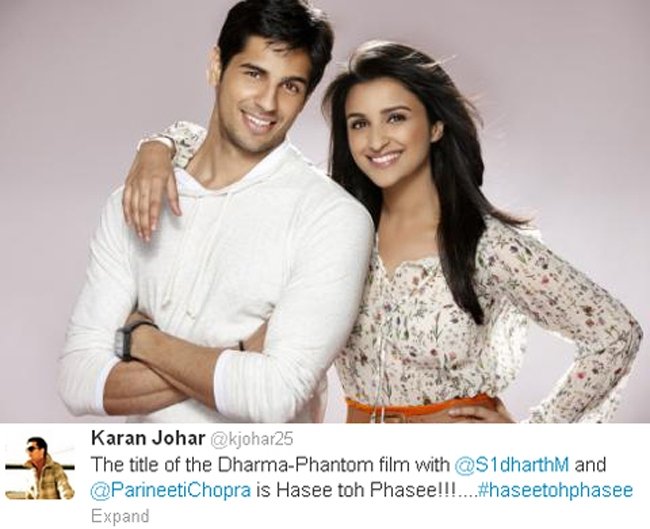 The cat is finally out of the bag! The rumours don’t always tell the entire truth, but in case of Karan Johar and Anurag Kashyap’s next, they’re every bit correct. It’s confirmed now Siddharth Malhotra and Parineeti Chopra will romance each other in a love story by adman Vinil Mathew. The title of the film, as revealed by Karan Johar, is Hasee Toh Phasee.

Adman Vinil Mathew is turning a director with this flick. Apparently, he is the one behind the film’s concept and will execute it too. Karan Johar has already taken to Twitter to announce the title, “The title of the Dharma-Phantom film with @S1dharthM and @ParineetiChopra is Hasee toh Phasee!!!….#haseetohphasee.”

The movie will be co-produced by Karan Johar’s Dharma Productions, and Phantom Production — which is floated by four filmmakers: Anurag Kashyap, Vikramaditya Motwane, Vikas Bahl and Madhu Mantena. Karan Johar believes that a blend of so many different thinking people is exciting for Hindi cinema.

Anurag Kashyap, too, is exhilarated by this upcoming project, and finds Siddharth Malhotra and Parineeti Chopra a promising pair. “The story works with fresh faces, but requires a high level of chemistry and maturity in the performances. After spending months, shortlisting various actors, we finalised Sidharth and Parineeti.”

It was also said that Vinil Mathew was keen on casting Siddharth and Parineeti, and expressed his desire to work with them to Karan Johar, who eventually got the two on board.