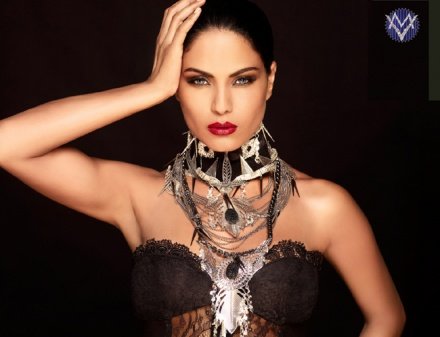 VEENA IS DRAMA QUEEN
Wearing many hats, the controversial Veena Malik turns a singer with her first album ‘Drama Queen’, and the siren dedicates it to her homosexual fans. Veena claims that she has done this album to support lesbians.

Do we see another Celina Jaitley on the rise! From being a lesser-known model-actress in Pakistan to a controversy queen in India, Veena Malik has come a long, long way. Now as she gears up for her new innings as a singer, the bombshell will make sure that the album is a sensational hit. And to up the sensational quotient, she has already announced that her new song will portray the relationship of homosexuality.

While talking to a daily, she spills the beans, “This song was an excuse to put every lesbian cliché and stereotype we could think of into one song. The album is specially dedicated to my lesbian and homosexual fans as I personally support them. As for my first single it’s the best of all.”

The teaser of her first single aptly titled ‘Drama Queen’ has already started doing the rounds of the internet. Interestingly, the album is about a woman who is in love, and Veena will be seen kissing her female love partner. But the singer has already clarified that she is personally not interested in women “that way”.