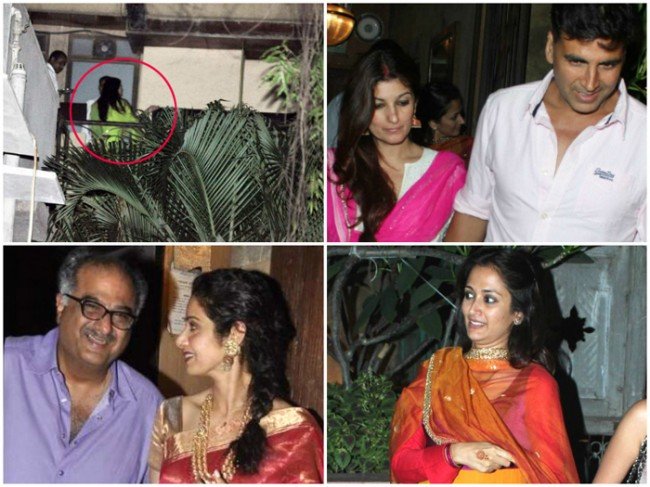 While the likes of Sridevi and Twinkle Khanna were accompanied with their respective husbands, Boney Kapoor and Akshay Kumar, Abhishek Bachchan couldn’t be present at the Bachchan residence Jalsa as Aishwarya Rai beheld the fourth-night moon and broke her fast. Rather, she had a glimpse of Abhishek through Skype.

“Abhishek out of country on shoot .. so face of husband seen through Skype, for Karvachauth by Aishwarya .. what times we live in !!” Amitabh Bachchan tweeted.

On the other hand, Sridevi and hubby Boney Kapoor had a Karva Chauth bash with close family and celeb friends at Anil Kapoor’s residence. Boney Kapoor has been quite open about how smitten he is with his beautiful wife Sridevi. (PHOTOS: Boney Kapoor throws birthday bash for Sridevi)

Spotted at the do was youngest brother Sanjay Kapoor with his wife Maheep. Actress Gayatri Joshi was also seen celebrating the festival.

Karva Chauth is celebrated on the fourth night after the full moon in the month of Kartik. On this day, Hindu women fast from sunrise to moonrise for the longevity of their husbands.