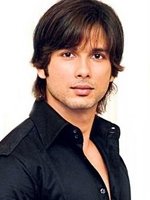 Shahid Kapoor started his acting career with ads. Born to actors Pankaj Kapur and Neelima Azim, carving a niche in Bollywood was no cakewalk for this boy.

He is greatly influenced by his father Pankaj Kapur, who is a critically acclaimed actor. His parents got divorced when he was only three, but he shares a good relation with his father and stepmother Supriya Pathak.

Shahid Kapoor was only 18 when he got to work in a Pepsi commercial with Shahrukh Khan, Kajol and Rani Mukherjee. He is trained in dance by the renowned Bollywood choreographer Shiamak Davar. He was also part of his troupe. Ad-man Ken Ghosh was the first to recognize his talent and gave him film ‘Ishq Vishk’ which did mediocre business. Shahid also won Filmfare Best Male Debut Award for his performance in the film. He dated actress Kareena Kapoor for three years and parted ways in the year 2007.

Earlier he was just a cute face with good dancing abilities, but later Shahid Kapoor evolved himself as an actor. Initially dubbed as a dark horse, he gave hits like ‘Vivaah’ (2006) and ‘Jab We Met’ (2007).