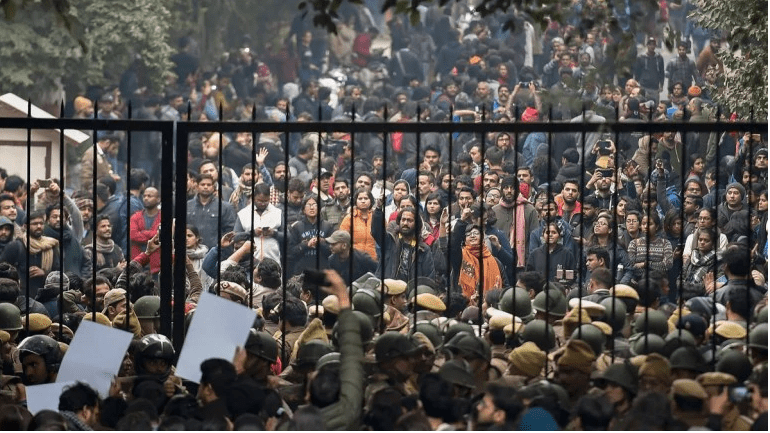 Students protesting against the violence at JNU campus on Sunday evening

The entire nation witnessed one of the most horrifying and heartbreaking incidents in the history of democratic India when on Sunday evening, violence broke out at the Jawaharlal Nehru University (JNU).

On the night of 5 January 2020, a mob of around 50-60 masked men and women carrying rods and sticks, barged into the campus, attacked on students and teachers of the college and vandalized the college hostel.

Reportedly, nearly 39 students including JNU Students’ Union president Aishe Ghosh, received serious injuries and were admitted to the All India Institute of Medical Sciences (AIIMS). The professors who made an attempt to stop the attack and protect the students were also beaten by the goons.

Non-stop violence and beatings on both men and women continued to happen for several hours; all this happened in the presence of the police. The attackers moved from one hostel to another, mercilessly attacking the people while simultaneously chanting slogans and calling the victims as “anti-nationals”.

The eyewitnesses said that the mob escaped successfully after attacking the campus for 3 hours and no action was taken by the policemen.

Background of the Incident

This was not the first attack that happened on JNU students but is certainly the biggest one. In the last few years, the prestigious Jawaharlal Nehru University has received a lot of criticism and has often been portrayed as a hub of “anti-nationals” by the right wing.

Jawarhal Nehru University is among the Top Universities In India (Currently ranked at no. 2) and a leading university across the globe. It offers many courses and has a unique academic structure that sets it apart from the crowd. The University is particularly famous for encouraging student activism for many years.

However, the University has always remained in the controversy owing to an event that took place nearly 3 years ago when the arrest of the then JNUSU president Kanhaiya Kumar made headlines in the news channels and papers. Ever since JNU has been facing constant criticism, intimidation and intermittent violence. 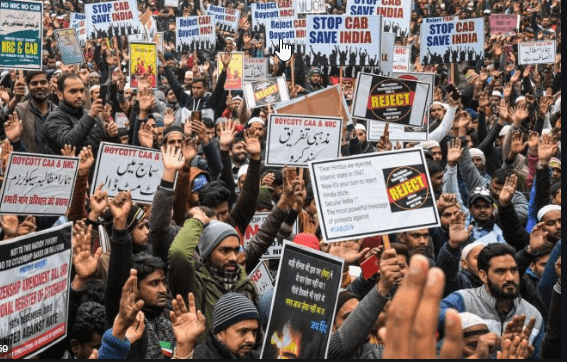 Recently the students of JNU participated in the protests held against the imposition of the Citizenship Amendment Act (CAA) as many believed that the act is discriminatory towards the Muslim community. The Act has received a lot of criticism lately as many people are of the view that it would cause a massive divide in the country, others claiming it to be a propaganda of the BJP government to secure its vote bank by offering citizenship to the outsiders.
The students’ participation in the protest against CAA has been cited as a major reason for the mob attack with an intent to suppress their activism.

Reportedly, JNU students had also been protesting against the hike in their fees which was announced last year. The announcement led to such massive protests by the students that a meeting had to be set up with the HRD on the college campus to talk about the issue. As many as 50 teachers and around 200 students were holding the meeting when the attack happened. The attack was carried out with a purpose to stop the students from raising their voices against the CAA and the fee hike.

In the wake of the horrific incident at JNU, several Bollywood celebrities showed their support to JNU by participating in a peaceful protest held against the attack at Carter Road in Mumbai. The protest noted the presence of some of the most prominent personalities of Bollywood – Vishal Bharadwaj, Anurag Kashyap, Anubhav Sinha, Zoya Akhtar, Diya Mirza, Rahul Bose, Richa Chadha, Swanand Kirkire, Reema Kagti, Hansal Mehta, Sayani Gupta, Gauahar Khan, and Taapsee Pannu, besides stand-up comedian Kunal Kamra. 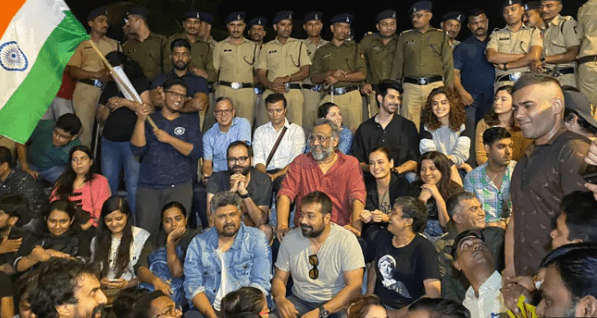 Amidst all the criticism that Bollywood had been receiving for maintaining silence over the JNU violence, one of the Bollywood’s top and highest-paid actors Deepika Padukone shows up at JNU to stand in support of the students of the university. 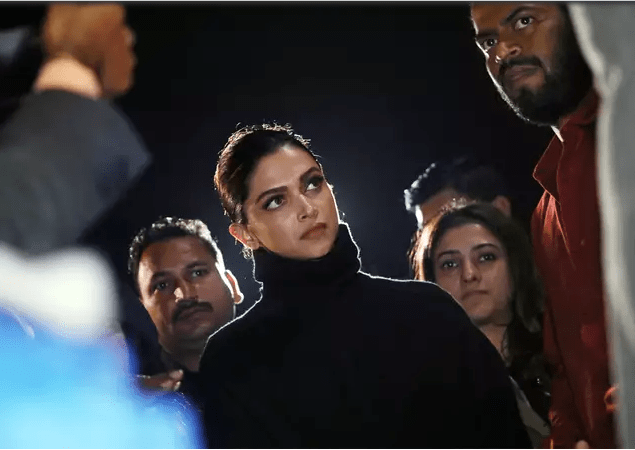 As per the reports, Deepika arrived at the campus of JNU around 7.45 pm on 7 January to show her support to the students protesting against the attack. The actress reportedly stayed there for about 10 minutes. She met the JNU Students’ Union president Aishe Ghosh, who was injured during the attack.
Her move has received both criticism and appreciation across social media from a number of people; some calling out for a “boycott” of her upcoming movie #chhapaak, while others supporting her visit at JNU saying it was a “bold” move by the actress.

A number of B-town celebrities took to Twitter to condemn the attack on the JNU students. While earlier, a lot of actors had maintained silence over the CAA issue, the recent violent attack at the students of Jawaharlal Nehru University led the actors to speak up against the same. Recently, we have seen a lot of Bollywood personalities coming out in favour of the JNU protestors.

Anurag Kashyap tweets about a peaceful protest in Mumbai’s Carter Road against the attack on students and teachers of JNU.
“Peaceful Silent Assembly in support of the students of India tonight the 6th of January 2020, from 8 pm to 10 pm, Carter Road Promenade opposite cafe coffee day. #forthestudents”.
Sonam Kapoor, who has always been vocal about the serious issues, tweets “Shocking disgusting and cowardly. Have the balls to at least show your face when you want to attack innocents.”

Sonam Kapoor, who has always been vocal about the serious issues, tweets “Shocking disgusting and cowardly. Have the balls to at least show your face when you want to attack innocents.” 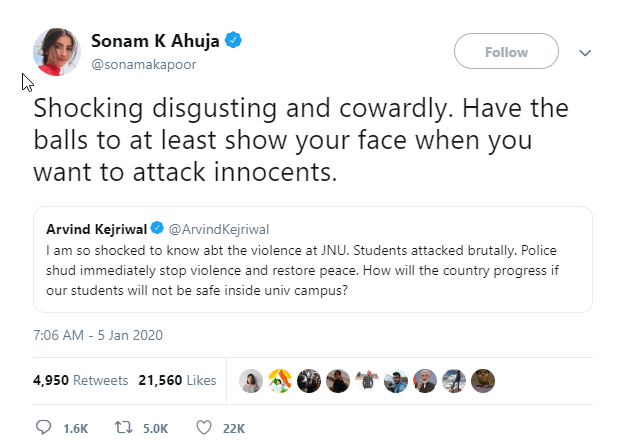 Taapsee Pannu tweets – “Such is the condition inside what we consider to be a place where our future is shaped. It’s getting scarred forever. Irreversible damage. What kind of shaping up is happening here, it’s there for us to see… Saddening.”

Genelia Deshmukh – “Absolutely disturbed to see the visuals of masked goons enter JNU and attack students & teachers – sheer brutality!! A humble appeal to the police to identify the perpetrators and bring them to justice.”

Riteish Deshmukh – “Why do you need to cover your face? Because you know you are doing something wrong, illegal & punishable. There is no honour in this-Its horrific to see the visuals of students & teachers brutally attacked by masked goons inside JNU-Such violence cannot & should not be tolerated” 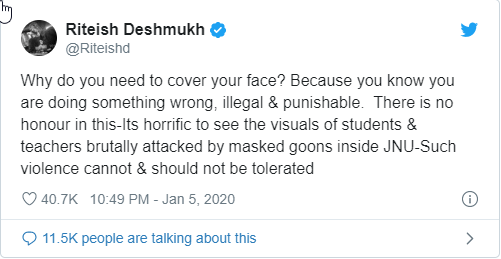 Richa Chadha – “Delhi Police, please note. Read up on Chauri Chaura, 1922. There’s no Mahatma alive today to call off a movement if it becomes violent. You are being used as dispensable pawns. The people will remain, you can’t possibly outnumber people.”

Shabana Azmi -“This is beyond shocking! Condemnation is not enough. Immediate action needs to be taken against the perpetrators.”

Pooja Bhatt -“To members of my supposed ‘fraternity’ who were meant to opine & dine with the ruling party this evening-trust you implored them to curtail the violence unfolding across the nation. Or at the very least, as part of the ‘scrumptious’ meal on offer, help yourselves to some humble pie.” 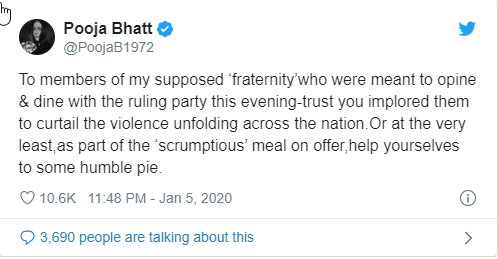 Konkona Sen Sharma – “Who are these masked cowards attacking students? Why are the police not protecting them?? Unbelievable.”

Prakash Raj – “Hurt.anguished..sickening to hear of the barbaric attack on students in #JNUViolence THESE WOUNDS ARE DEEPER THAN FLESH.. will we hang our head in shame for being silent spectators or will we stand up against these bigots who are terrorising our children..our future #JustAsking” 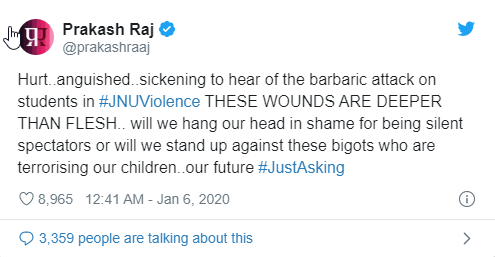 “It breaks my heart to see what happened at JNU! What’s going on in India is horrifying!! Students & teachers being beaten up & terrorized by masked cowards!! The constant blame game! Stooping so low for political agendas! Violence is NEVER a solution! How have we become so inhuman?” tweets actress Kriti Sanon.

During the promotions of his upcoming film ‘Street Dancer 3D’, actor Varun Dhawan said, “I think we cannot stay neutral in such issues. You have to condemn such attacks It is dangerous and sad if masked people enter an educational institution and all this (assault, vandalism) happens.”

One of Bollywood’s top actors Alia Bhatt, too, shows her support through a Facebook post where she writes, “When students, teachers and peaceful civilians become victims of physical assault on an ongoing basis, it’s time to stop pretending that all is fine. We must look truth in the eye and acknowledge that we are a house at war with itself. We, the people of this country no matter how different our ideologies, must find a human solution to all of our complex problems, and reinforce the peaceful and inclusive ideals upon which this country was built.”

What is your say?

The past few days have seen some very brutal and dramatic incidents happening in and around the country; definitely not a great start to the year 2020! The massive outrage within the nation seems to be having no end with recurring cases of violence and riots. There have been people on both ends – some supporting the JNU students, while others calling it an unnecessary drama. The recent visit of Deepika Padukone at the JNU campus received both criticism and appreciation. Meanwhile, other actors of Bollywood have also broken their silence and have been actively tweeting their opinions on social media. The entire country is in shock right now and unable to comprehend all that is happening. What do you think about the whole issue? Comment your views below!

One thought on “Bollywood breaks silence over the JNU violence!”