The wait is finally over, the most anticipating movie of all time is finally going to be released very soon in the cinemas. It is an upcoming 2020 Indian Hindi Language film which is directed by none other than Mr. David Dhawan. The director has made tons of hit movies in the Bollywood industry. The film is produced by the Vashu Bhagnani.

The movie is a remake of one of the most popular films, “Coolie no. 1”. It has won the heart of the Indian people. This is the main reason why the remake of the movie is taking place. The poster of the film is already out, and it has spread into the millions already. The movie is all set to hit the cinemas of India on 1 May 2020.

Talking about the cast of the film, The leading actors of the film are Varun Dhawan and Sara Ali khan. Varun Dhawan is the lead actor in the movie, and the whole story of the movie will revolving around him. With that being said, you will also be able to witness Sikha Talsania, Vikas Verma, Paresh Rawal, Javed Jafferey, Rajpal Yadav, Johny Liver, and Sahil Vaid during the movie. It is said to be a comedy film, and as we also have seen in the as we also witnessed the same in the poster. If you are fond of watching comedy movies, then there is no better option than a remake of the Coolie No. 1. 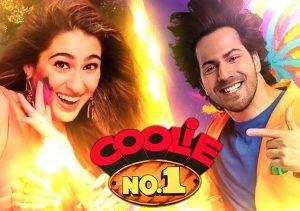 The movie is primarily based on the comedy. However, the trailer is not yet out. We can expect the movie to be a little romantic too. Recent reports have suggested that the movie is going to be the combination of both comedy and romance. The story will revolve around the Varun Dhawan and Sara Ali khan. Both of the actors have been the talk of the town ever since they have debuted in this utmost industry of Bollywood.

There are several images being leaked on the internet, which shows us a glimpse of some scene and cast. It has been more than a month since the news of the movie were spread out. The director of the film Mr. David Dhawan finally went to Bangkok with the whole cast, and it is being said that the shooting has been successfully completed. The media reports have also said the cast and crew members are soon going to make several public appearances in order to promote the movie. We can also expect the trailer to be released in the upcoming weeks.

The writer of the movie Farhad Samji has posted on social media about the short video. The video is about the specific shoot of the film. Farhad was being seen making the huge announcement as he is spied wearing the badge of coolie number on his arm. The makers have also said that the film is not the exact remake of Coolie No. 1, 1995, but an adaption. 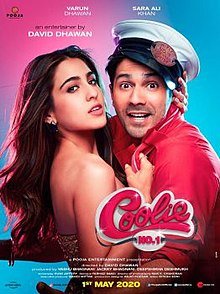 Varun Dhawan has also shared a video earlier. We got see him getting ready for the shoot of the new film, which is none other Coolie No.1 2020. In the caption, he wrote, “Don’t take life too seriously, you will never get out if alive – Elbert Einstein.” The movie has already created the hype among dozens of people already. People are very much excited and cannot for the movie to release. After the successful hit of Judwaa 2, Varun is all set for the upcoming movie Coolie No. 1. The movie is expected to grab the attention of many people, as one of the most trending actresses will be playing the lead of actress in the movie. It won’t be easy for Varun to stepping the shies of Govinda. However, filmmaker David Dhawan is confident is very confident that the Varun is capable enough to pull off the character with elan. The launch of the movie is going to take place soon, which is 1 May 2020. Let’s wait and see for the trailer of the film and see what more it is going to bring for the viewers.