With an extensive shut down due to the COVID-19 outbreak, people are finding several ways to be occupied. Some people are trying to become more productive, whereas some are enjoying the quarantine period and spending time with their families happily. But, the B-Town denizens have found an all-new away to utilize the time. The celebrities are now looking forward to spending their time learning organic farming. There are plenty of celebrities who are following the same, whereas some of the celebrities are more inclined to grow the fruits and vegetables in their garden. There are people who are committed to clean out their houses and gardens as well.
It was first started with Bhumi Pednekar who decided to begin with organic farming. It was reported earlier that Bhumi Pednekar is pretty much inclined towards learning the science of hydroponics farming. During this long period of quarantine, she has been being taught by her mother about soilless gardening.
The actress informed me a few days ago- “My mother and I have always desired to have our own hydroponics garden where they can grow their own vegetables and have a sustainable lifestyle.” She further informed that she and her mother desired a garden which tables the lifestyles of the home and they both are happy with the progress going on. During the quarantine, the actress has been working closely with her mother and proud to have a garden ready to produce the vegetable for two weeks. 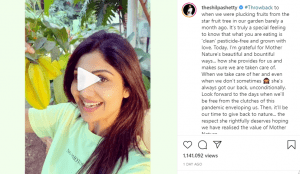 There are other celebrities as well who are utilizing this time doing different things. There are a lot of celebrities that are posting their videos on social media doing several things. Recently we got to witness Shilpa Shetty with her son. In a video. The actress was seen holding a broom and cleaning the garden. We got to see another video by Shilpa Shetty who was uploaded last week. In the recently uploaded video, we got to see her teaching her son how to pluck the brinjals from their garden and at the same time making sure her son didn’t touch the green chillies.
Apart from the video, she also wrote a caption below saying, it is one of the greatest joys of life is to witness your hard work coming to fruition in the circle of life. The caption was about her journey of growing the brinjals for four months. She further wrote, she was thrilled to see the green chillies and brinjals growing up. Further, she wrote a popular saying from the Bible, Galatians VI- what you sow; you shall reap.

Talking about some other celebrities, we also got to see the rivalry between Raveena Tandon and Mouni Roy, where they were seen to have a competition of organic tomatoes. The actress Mouni Roy waters her organic flower plants on a regular basis and also shared an image of tomatoes which were freshly plucked. Both uploaded the pictures of homegrown tomatoes on Instagram. Raveena with a caption below the picture said people often forget the simple things in life which can bring such joy. 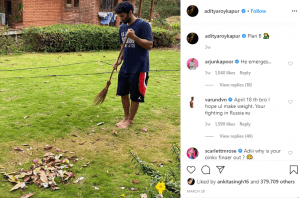 Aditya Roy Kapoor has also seen on Instagram uploading the picture on Instagram in which he was holding a broom and sweeping the dry leaves in the garden.
The rapid spread of the COVID-19 and the lockdown in the whole country has also turned the Juhi Chawla into an organic farmer. We got to see the Juhi Chawla sitting in the garden, preparing the beds for fenugreek and coriander. She posted a picture in which she was planting the tomatoes and captioned it as “Naya Kaam”. Her caption was quite sarcastic, which made her fans laugh a lot in the comment section. The post has become pretty much engaging in social media and also been reposted by some other celebrities as well.
Now, talking about the celebrities on Twitter, the actress Diya Mirza tweeted with a picture: “Favorite chore of the day – watering the garden.”

Payal Ghosh has recently uploaded a picture on Instagram too. Just like the others, we were also seen with the broom and taking care of her plants in the garden. It has become a trend, and a bunch of celebrities were seen with a broom and watering their plans and cleaning the garden.
It seems like the celebrities have finally found a way to keep themselves busy or occupied.