Ranveer Singh is all geared up for his latest Biopic of World Cup Winner Indian Cricket Legend Kapil Dev outing with his wife Deepika Padukone.  The movie, titled as ’83, is directed by Kabir Khan. The latest released shots from the shooting show Ranveer and his better half dresses and styled as Kapil Dev and his wife Romi Dev. And needless to say, the two talented actors have nailed the looks quite well. 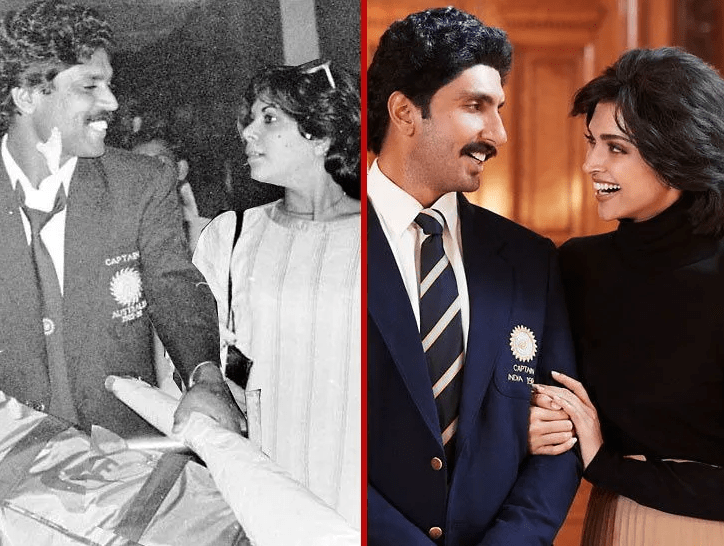 The details of the picture

In the latest picture, Ranveer is seen in the blue blazer identical to Indian cricketers. He sports curly hair and a mustache just like Kapil Paji. On the other hand, Deepika stuns us with her resemblance to Romi. She is seen in a Black turtle neck top and a pleated skirt of the typical 90s fashion. Her hairdo is identical to her character- a layered bob.

The actor pair is excited about its latest joint venture. According to Deepika, her portrayal of Mrs. Dev is an homage to all the ladies who have supported their life partners in their life; including her mother. Her role is small but is essential for the movie. She feels honored with the chance to portray a character related to India’s favorite sport.

Many other photographs show how the actors and directors have recreated even the smallest details from the life of Kapil Dev. Fans even released some still images from the movie and posted them side-by-side pictures of Deepika and Ranveer to point out the resemblance.

According to the director, he wanted someone who could capture the positive aura of Romi and Deepika was just perfect for the role. He also adds the understanding between the actor couple has also helped them to portray the role of Kapil Dev and his wife with ease and elegance.

What is the movie all about?

With so many big names essaying the role of different cricketers, 83′ will surely be a mesmerizing film in 2020. It beautifully captures the life of Kapil Dev from the start of his cricket career till his historic World Cup Winning in 1983.

Actors in other significant roles

Ammy Virk and Addinath M Kothare will be seen as the on-screen persona of Balwinder Singh and Dilip Vengsarakar. Viewers will get to see Dhairya Karwa(Ravi Shastri), R Badree(Sunil Valson) and Pankaj Tripathi(PR Man Singh)  in important roles.

Needless to say, movie buffs will get to see the historic victory again through the movie ’83 on 10th April 2020.